DAYLIGHT SAVING! WHEN DID IT BEGIN AND WHY? 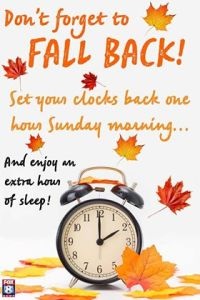 HAVE YOU EVER WONDERED WHY WE FALL BACK AND SPRING AHEAD?

Credit—or blame—for the biannual shift goes back to Benjamin Franklin, who published An Economical Project for Diminishing the Cost of Light in a 1784 journal after he noticed that people burned candles at night but slept past dawn.

But he never saw his plan put into action. The U.S. first implemented daylight saving during World War I as a way to conserve fuel with the Standard Time Act of 1918, also known as the Calder Act.

Under the act, states and territories can opt out of daylight saving. It isn't observed in Arizona (except the Navajo Nation), Hawaii, American Samoa, Guam, the Northern Mariana Islands, Puerto Rico and the Virgin Islands, according to the Congressional Research Service.

Daylight saving is observed in approximately 70 countries, including most of those in North America and Europe. (The Tennessean-part of USA Today)

The Kingsford Charcoal Company, Clorox and 7-Eleven lobbied to have the date extended to the present dates which occurred in the 1980's--more time for family/friends for grilling and BBQs.  It was also a win for parents who didn't want their children waiting for the bus for school in the dark. And, the all powerful Halloween Candy lobby. (© 2018 Viasat, Inc.)

Don't forget the kitchen clocks and your car clocks too! Even with our technology, some of our clocks have to be changed the old fashioned way!